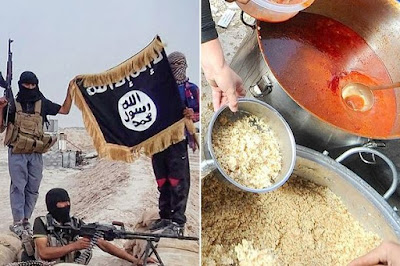 Dozens of ISIS terrorists were killed after breaking their Ramadan fast with a poisoned meal Dozin the Iraqi city of Mosul. According to Haaretz,the venomous dinner was dished up to 145 jihadist for iftar - the traditional meal which celebrates the end of the day's fasting.Shortly after the meal.45 of the fighters died.

It's not clear if it was a deliberate toxic attack or just a bout of food poisoning said a spokesman for the Kurdish Democratic Party.