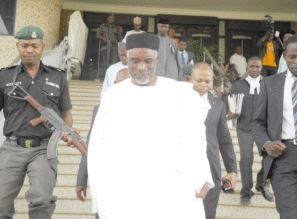 EFCC disclosed that 2 of its crucial witnesses in the N29billion fraud case against former Adamawa state governor Murtala Nyako, his son Abdulazis and other associates, have died mysteriously. The anti-graft agency told a Federal High Court sitting in Abuja on Friday July 10th that the mysteriously deaths of the 2 men have put fear in other witnesses who are now refusing to cooperate with them for fear of the unknown. EFCC begged the court to remand Nyako and his co-accused as it would be dangerous to allow them go on bail & also so witnesses could come forward & testify against them.

"Two of our crucial witnesses, Ma’aji Mohammed Iro and Abdulmalik Dalhatu have died in mysterious circumstances and this has instilled fear in other prospective witnesses in the case" EFCC told the court.

Ma’aji Mohammad Iro was a Regional Manager with Zenith Bank, who was in charge of Adamawa State Govt's accounts with the bank and allegedly assisted the former governor in the looting spree.