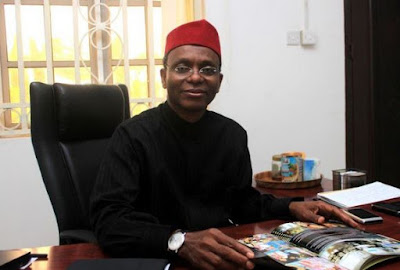 So earlier today a certain media platform, The Union, reported that Kaduna state governor, Mallam Nasir El Rufai had declared N90 billion and 40 houses in the FCT as his assets before the Code of Conduct Bureau.

"Governor Nasir ElRufai of Kaduna State has declared his asset. He is worth N90 billion. The governor’s assets declaration came as a big shock to most Kaduna residents yesterday as he allegedly declared ownership of 40 mansions, most of which are located in Abuja. Kaduna State Director Code of Conduct Bureau, George David, however, declined to comment when contacted." The Union wrote

Reacting to the publication, El-Rufai, through his media aide, described it as false and says they will be suing the publishers. Find the statement signed by the governor's media aide, Samuel Aruwan after the cut..
sponsored post

After a busy few weeks as governor, Malam Nasir El-Rufai is dismayed by the blatant falsehood being practised as journalism by The Union newspapers. He has consequently directed his legal team to vigorously enforce his rights to protect his reputation from the vandalism of irresponsible hacks.
The Union chose to write a spurious story alleging N90b as his assets declaration without seeing the declaration made by Malam El Rufai.

The circle of blackmail that did the story claimed they heard a rumour, and they pursued the rumour so vigorously they transformed it into news. When some of their cohorts made contact with the governor’s media team insisting that they respond to rumour, they were told that it is better if they chose the more legitimate route of agitating for a public asset declaration.

Fair minded people who read the story will notice that it is not grounded in any evidence. It is just the animus of blackmailers who regard Malam Nasir El-Rufai as easy prey. But since his reputation is not based on purchased kudos, he cannot be compelled into accommodation with venal people masquerading as journalists.

Malam Nasir El-Rufai is a privileged Nigerian. He qualified as a chartered Quantity Surveyor early in life and became a dollar millionaire in his twenties. He is a respected leader in in his professional field but as successful as he has been in his career, he certainly has neither N90 billion nor 40 mansions.

He will not be distracted from his total focus on making Kaduna great again. In this endeavour, he will continue to be accessible to practitioners of responsible journalism.