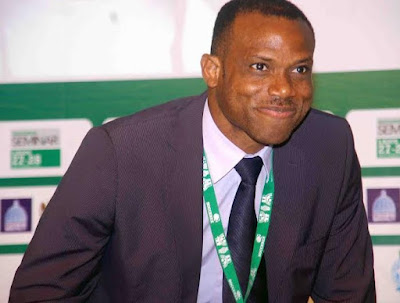 The Federal government through the National Sports Commission (NSC) has threatened to stop the planned unveiling of Sunday Oliseh as the new head coach of Super Eagles by the Nigeria Football Federation (NFF) on Wednesday July 15th.

According to The Guardian, a letter was sent to NFF from the office of the NSC yesterday July 12th, stating that Sunday Oliseh's appointment as the new head coach for Super Eagles after Stephen Keshi's sack did not conform with the Procurement Act procedure for engagement.

According to NSC, the office of the head coach of the Super Eagles is still vacant and no one has been appointed to take over from Stephen Keshi. A source in the Nigeria Sports Commission's management team said.


"The procedure for hiring Sunday Oliseh did not pass through the Procurement Act. It was the same when the NSC employed the High Performance Directors. The Sports Commission requested for waiver for selective bidding, which enabled us to select people based on their credentials. We selected people and interviewed them in the United Kingdom. The Deputy Director in charge of Procurement attended because it is a procurement exercise, which must go in accordance with the Procurement Act. The engagement of Oliseh is a contractual one but it is unfortunate that the federation may not have been guided accordingly. If the federation goes ahead to unveil Oliseh on Wednesday without following the due process, they would be violating the Procurement Act, they would be found liable. The truth is that even if they have secured the consent of a private company to pick Oliseh’s bills, the law of the land on engagement must be observed. The procedure is for the NFF to write to the Sports Commission informing them of their plans to engage a technical expertise like the Eagles chief coach and his assistants, specifying the terms of relationship. If they don’t want to advertise, they can do selective bidding. If they must interview and hire Oliseh alone, they must apply for waiver of certificate of no objection giving reason for the decision to settle for him alone. Unveiling him on Wednesday is tantamount to violation of the due process of the procurement in accordance with Procurement Act. Writing to NSC is just a point of information and point of information is not a legal process. NSC has no business with their day-to-day operation but if the operation violates the law, we will draw their attention to it and take any managerial and administrative measure that must be taken. As I speak to you, NSC does not know whether there is any unveiling this week because we are an institution guided by official communication and far as we are concerned, nobody from the federation has communicated to us officially if there will be any unveiling". he said