Forgive me for your prison experience, Lamido begs sons 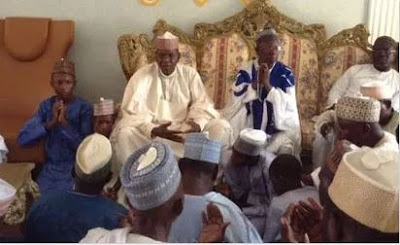 Former Jigawa State governor, Alhaji Sule Lamido, has asked his two sons, Aminu and Mustapha, to forgive him over their prison experience, as he claimed total responsibility for their ordeal in the hands of the law.

In an interview with international radio station, VOA Hausa service, monitored by Vanguard shortly after his return from Abuja, in company of the two sons, Lamido described his arrest as the beginning of restoration of confidence in political leadership in Nigeria.

The 69-year-old former governor recalled that he had been incarcerated in the past for holding opposing political views, declaring that he would never be discouraged in politics.

The protégé of late Malam Aminu Kano said he had gone through many political incarcerations in the past and noted that if the purpose of his recent arrest by the EFCC was to humiliate, deconstruct and destroy him and his family, he won’t be discouraged.
Lamido said his arrest by the Economic and Financial Crimes Commission, EFCC, was a political hazard that a serious politician must pass through.

He said: “In the process to improve democracy, there would be some mistakes. I am not a perfect human being; I have my own shortcomings. And in my own case, I’m outspoken, which perhaps explained why people found me too offensive and irritating”.

The former Foreign Affairs Minister explained that his pains weren’t his detention, but his sons who were innocent but had to suffer simply because their father served as a governor.

Lamido admitted he caused their detention and as such they should forgive him and be patient with the situation they found themselves.

He pointed out that he is determined to serve his people, adding that he had no grudges against anybody over his arrest, and that those who see him as a corrupt person were entitled to their opinions.