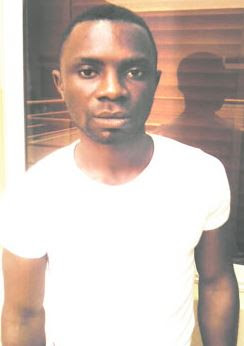 A 35-year-old gospel musician, Olalekan Opaleye, has been arrested by policemen attached to the X-Squad of the Lagos State Police Command for allegedly obtaining the sum of N40m from a pensioner, Mr. Michael Shote, under false pretences.
Shote, who retired from a telecommunication company in London, and the suspect were said to have known each other two years ago, when the former reportedly told him to quit driving and promised to sponsor his musical career.

It was gathered that the 75-year-old pensioner financed a record produced by Opaleye, who lived in an Ikorodu building owned by the pensioner.


Our correspondent was told that in July 2013, Opaleye approached Shote, saying former Senate President David Mark, allegedly wanted to give a contract to his friend to supply 20,000 laptops and freezers, among others, to the National Assembly.

He was said to have persuaded the businessman to invest in the deal and reportedly collected the sum piecemeal between July 2013 and April 2015 on the pretext that he wanted to use it to facilitate the contract.

PUNCH Metro learnt that the scam blew open in April 2015, when the complainant insisted on seeing the documents backing the contract, which the suspect could not produce. Opaleye was arrested after the alleged fraud was reported at the state police command.

Shote, a resident of Irepedun Street, in the Sangisha area of the state, said he fell for suspect’s scam because he wanted to assist him.

He said, “I knew him in 2013 through my sister, who he worked for as a driver. He complained to me that he was unfairly treated. I told him to leave the job. He took me to his parents in Mushin and when I saw their situation, I decided to assist him.I gave him my apartment in Ikorodu to live. He told me he sings gospel music and needed a financier. I spent about N5m on his record.“In July, 2013, he said he met a secondary school friend who brought the contract. Because of the trust I had in him, I decided to facilitate the contract with my money.

“At a point, my friends told me that the contract was a fraud, but I did not believe them until I asked him to bring the documents in respect of the contract, but he could not provide them.
“I have lived in London for 50 years. That is where my family is and that is where I worked for decades until my retirement. I only come home to assist people.”

Opaleye was arraigned before an Ikeja Magistrate’s Court on three counts of fraud and stealing.