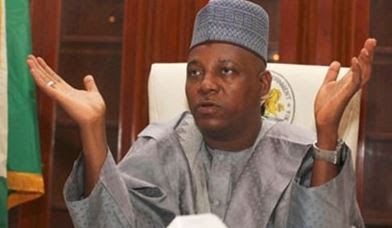 According to Thisday, Shettima's support for an amnesty programme for the terrorist group was re-emphasised at an interactive session organised by his Special Adviser on Communications and Strategy, Mallam Isa Gusau, with selected journalists in Abuja.

Gusau said Shettima's call was scientific and had been vindicated by a very desperate effort of Boko Haram leaders to stop their fighters from leaving their fold when a group of 16 members renounced the sect's ideology in Borno State following which they were slaughtered by the sect's leaders.

He said: "Governor Kashim Shettima was misunderstood by many Nigerians when in his May 29 inaugural remarks revisited his stance on the need to apply a political solution to fighting the Boko Haram by way of granting a window to admit those willing to surrender their arms and renounce the Boko Haram ideology.

"Shettima has held this position from his campaign days ahead of the 2011 elections for his first term. He had always advocated a combination of three approaches, which are: the military which is what we have in place, an economic approach which is aimed at providing jobs for people and discourage citizens that Boko Haram terrorists are recruiting."

"It is important to note that the governor has always advocated that the three approaches should be applied together not exclusively. However, the amnesty issue has been the controversial one. The governor is not really talking about dialogue as a start, what he is advocating is to create an opening for those ready to abandon the sect to be able to do so freely, so that the sect can be broken.

"He is very particular about hundreds, if not thousands of members that were conscripted or forced to join the sect and became killers against their wish. If attacks on all communities can be efficiently done, then there wouldn't be need for any debate on amnesty but we all have seen that many communities have continued to suffer from these attacks because the communities are so much, not only in Borno but round Nigeria and we don't have the right proportion of security personnel to secure all communities."

"When insurgents attack communities, they mostly target male youths, they arrest them and guard them into bushes. In most cases, even before taking them out of the towns they attacked, they preach in support of their ideology with promises of heaven for adherents and then openly ask aloud if any of the youths is willing to join them or not and whoever said he is not ready to join them, they slaughter him right there sometimes in the presence of his parents or they lay them on row and shoot all of them in matter of seconds targeting their skulls.

"We have seen many of these instances in videos recorded in Gwoza and other parts of Borno State. Now, what Governor Kashim Shettima has been saying is that hundreds of these forcefully arrested and initiated young men may want to run away and drop their arms and there should be a policy and programme to admit them so that insurgents lose members and their strategy of arresting youths and forcing them to join them which is what they apply in sustaining their membership, can be deflated and I think the governor's call on May 29 has been vindicated less than two weeks ago.

"You might have read it on most news platforms that on Friday, July 3, 2015, Boko Haram insurgents beheaded 11 of its members who renounced their ideology. According to accounts by some locals, what happened was that some members of the sect who are indigenes of some villages in Damboa Local Government Area indicated interest in abandoning the ideology but most of them were afraid of the consequences. Out of them, 16 summoned courage to renounce the ideology and they moved to Miringa village in Biu Local Government Area of Southern Borno. They wanted to join some communities like Ajigin and Talala in Damboa.

"The 16 insurgents went to Miringa on Friday, July 3 according to locals, then at night, commanders of Boko Haram sent a team to Miringa to fish out the 16 members that denounced the sect. The team went from house to house and got the 16 members intact. They didn't fire any shot in order not to attract soldiers. They took the members out of Miringa and slaughtered 11 of them and went away with five. The bodies of the 11 executed members were found the following day while the other five were not seen," he said.