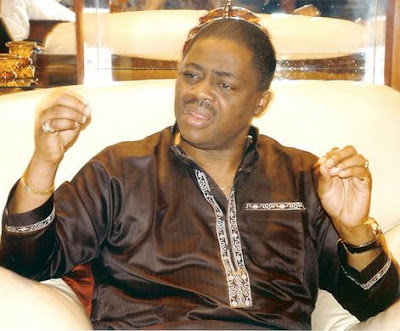 It has been brought to our attention that Premium Times, a popular Nigerian online magazine, has alleged that Chief Femi Fani-Kayode wrote the following words on his Facebook page- ''For rejecting Jonathan, Nigerians deserve Boko Haram''. This is false and, needless to say, Chief Fani-Kayode has never and would never say such a thing or harbor such a horrendous and heartless view.

For the last few years Chief Fani-Kayode has been one of the loudest and most strident voices against Boko Haram in Nigeria and he has continously and courageously condemned them. He has also continously expressed his grave concerns about the barbarity and sheer evil that they have unleashed on the Nigerian people and he has constantly expressed his condolences to and support for the families whose loved ones have been murdered by them over the years.

For Premium Times or anyone else to allege that Chief Fani-Kayode wrote that the Nigerian people ''deserve Boko Haram'' under any circumstances is not just mischievous but it is also irresponsible and malicious. It is a wicked lie which is designed to endanger the life and reputation of Chief Fani-Kayode and to subject him to public odium, ridicule, outrage and opprobium. We challenge anyone that doubts the veracity of our contention to go and read Chief Fani-Kayode's write-up on his Facebook wall because it is still there.

They should point out where President Jonathan's name was mentioned and they should also point out where he wrote that ''Nigerians deserve Boko Haram''. We urge our friends in the media to please check their sources properly before going to press and to quote people accurately.

They should also treat such matters in a thoroughly honest and professional manner and with the greatest sensitivity. Since yesterday night we have been inundated with calls from concerned Nigerians about this fake headline and we have had to go to great lengths to set the record straight. We appreciate the fact that the overwhelming majority of Nigerian media practitioners always adhere to the highest standards of ethics and practice but when things go wrong, for the sake of posterity, it is important to set the record straight.

My original text on Boko Haram published on my facebook page

Anyone that honestly believed that a man who secretly shares the same vision and core principles of Boko Haram and who spent many years defending them can do anything but give them a free hand when he comes to power is living in cuckoo land.
I am not surprised by all the recent bombings and killings. I am not surprised by the resurgence of BH and their new found barbarity, courage and zeal. Military checkpoints have been removed from our roads so what do you expect?


Boko Haram suspects are now being kept in prisons in the eastern part of the country in order to ''spread the word'' and no less than 182 Boko Haram suspects were released on the Presidents orders just a few days ago. Is all this just a coincidence or is something that is dark and sinister now afoot in our country?

Whatever each of us may or may not believe, one thing is clear- that Boko Haram now have powerful friends and secret allies right at the epicenter of power and those friends and allies are running the affairs of the country.

There is a much wider picture unfolding here which the Nigerian people have yet to see and which they find difficult to accept, understand or comprehend. There is a hideous and frightful hidden agenda which is slowly manifesting before our very eyes. Though we warned them, the Nigerian people wanted "change" so they must live with the consequences of their choice.

One of those consequences is the new-found audacity, courage, growing power and rising strength of Boko Haram. Another is the resurgence of a clearly ethnic agenda which is designed to leave no-one in doubt about who really owns Nigeria and who the slaves are.


Another is the destruction and demystification of Bola Tinubu and his yoruba loyalists by his erstwhile northern allies in the APC. Only a fool did not see that one coming and I am rather surprised that Tinubu's followers are now crying foul and alleging that there is a northern conspiracy. Didnt they know that before? Were they not warned over and over again?

There are many other grave consequences which the Nigerian people will witness, in a most harrowing and frightful manner, in the next few months and years. May God deliver our people and our nation and may we learn to make the right choices.