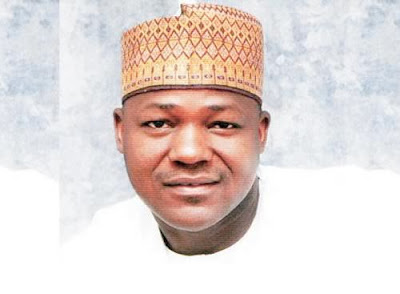 House of RepresentativesSpeaker Yakubu Dogara yesterday dismissed suggestion that he was planning to return to the Peoples Democratic Party (PDP).

He said he would not be a party to the destruction of the All Progressives Congress (APC) which he worked hard with others to build.

Dogara who was apparently reacting to claims by his opponent in the June 9 contest for the speakership, Mr. Femi Gbajabiamila that he (Dogara) and some of his APC supporters in the House were preparing ground for their defection to PDP said “only a fool will believe that.”


Exchanging views with state chairmen of the APC who visited him in Abuja, the Speaker also said that those expecting the party to collapse on account of the leadership crisis rocking the party at the National Assembly would be disappointed.
According to him, the party can only emerge stronger from the crisis that was not strange to party politics.

His Special Adviser on Media and Public Affairs, Turaki Hassan said in a statement that Dogara however warned that any move to marginalize some members in the sharing of principal offices in the National Assembly may prove disastrous for the APC in the next general elections.

He said: “I want to discountenance this very ludicrous and laughable discussion that some of us that some of us in the house are even conniving with some people so that we can defect.

“Only a fool will believe that. We have toiled day and night we control the government at the centre and in our states. Then we park and move to a house that we deserted before, it is even unthinkable and unimaginable that someone will make such assertions.

“We have been through a lot but obviously it is expected as it is a new party we are beginning to know ourselves. It was expected that from the beginning we would have some kind of friction but we cannot be consumed by those frictions. I guess that is one reason why we are here today”
.
On the issue of party supremacy, the Speaker said: “It is my deepest conviction as a student of democracy I know that democracy is loosely defined as government of the people by the people and for the people.

“Absolute supremacy must be anchored on the sovereignty of our people because if we don’t pursue the interest of our people, you can guarantee the fact that sooner than later there may be no APC. “So the people must be at the centre of whatever policy we formulate or whatever directive we will give to somebody from the party must have our people at the centre of that activity otherwise the people will rebel against us and we don’t pray for such.”He said his action and that of his supporters should not be viewed as signs of disloyalty to the party, saying, “All of us contributed immensely to the building of the APC. It is our duty to ensure that the party survives. And they say it is only a mad man that will use the same hands that he used in building a house to pull it down. We are not mad, we are not fools.”

The Speaker, however, warned that to marginalise some zones in the sharing of positions principal officers of the National Assembly would cost the party in the next election.

“We have to extend the hands of friendship and brotherhood to them to ensure that we strengthened their position so that we can make considerable inroad into those states.

“If we don’t do that then we should be counting our days because if Nigerians didn’t save PDP, if we mess up they won’t save us. We owe more than just passing interest in ensuring that we continue in the task of rebuilding the APC.”

He urged the leadership of the party to place national interest above personal ambitions as he hoped to partner PDP in moving the House forward.

“As long as we put this national interest forward we are not going to have a problem, we want to be in this for the long hold and not a sprint race but rather a marathon.

“Sincerely speaking we cannot afford that APC becomes an exclusive club of certain privileged people. We must spread our hands otherwise we will diminish. And that therefore means that the work has just begun especially in states that we are not in power. “The House is always a one house, we work in such a way that we keep the house united in spite of our political party affiliations.
“If we have divisions in the House and if that division is sharply along partisan lines, most of the instructions you will give us in form of programme that you send to us through the executive may suffer delay.

“Our people will expect that we use our majority position to bring about leadership with cooperation from even the opposition party and deliver the promise of change.”

The delegation was led by acting Chairman, Alhaji Umar Haruna Doguwa, who is also the Kano state APC chairman.