Man arrested for peeping at neigbour's wife in bathroom 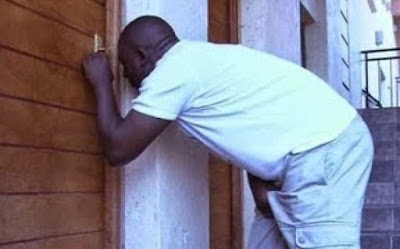 A 36-year-old man, Oludare Adewale, has been arrested and charged before Oshodi Magistrates’ court for allegedly peeping at his neigbour’s wife, Victoria Emmanuel, in their bathroom in Lagos State western Nigeria.

According to PM News,the incident happened at 23, Arowojobe Street, Oshodi where both the defendant and victim reside.

The woman had gone to take her bath in one of their bathrooms in the morning and Adewale followed her and entered the other bathroom under the guise of taking his bath as well.

The police alleged that Adewale peeped at Victoria through an opening in the bathroom as she was bathing early in the morning.

And while Adewale was busy peeping, Victoria, who had always suspected Adewale of doing such, caught him in the act and raised the alarm which attracted other neighbours. He was caught and handed over to the police by the neighbours.

At the Makinde, Oshodi Police Division where he was taken, he allegedly admitted that he actually peeped at Victoria but did not know it was an offence.

The police charged him to court for the alleged offence under the Criminal Code but he pleaded not guilty.

The presiding Magistrate, Mr A.A. Fashola granted him bail in the sum of N100,000 with one surety in like sum.

He was remanded in prison custody pending when he will perfect his bail. The matter was adjourned till 23 July, 2015.

P.M.NEWS learnt that the parents refused to stand as surety for him because of the shame he brought to the family.

It was gathered that Adewale lives with his parents in the same house where the incident happened and he has refused to marry and settle down.