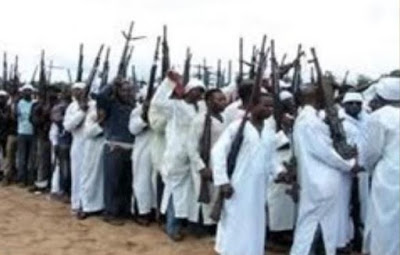 Women and children rescued by Nigerian soldiers from Boko Haram extremists at Sambisa Forest wait for treatment at a refugee camp in Yola, Nigeria Monday, May 4, 2015.

Spokesman Maj. Gen. Chris Olukolade said Babuji Ya'ari headed a "terrorists' intelligence cell" for the Islamic extremists while masquerading as a member of the self-defense Youth Vigilante Group. That news confirms suspicions that the vigilantes have been infiltrated by Boko Haram.

Soldiers have told the Associated Press that some of their comrades also belong to Nigeria's homegrown Islamic extremist group.

"The arrest of the businessman... has also yielded some vital information and facilitated the arrest of other members of the terrorists' intelligence cell who are women," Olukolade said in a statement Tuesday night. He did not say when the arrests were made or how many people were arrested.

He alleged that Ya'ari has coordinated several deadly attacks since 2011 on the northeastern city of Maiduguri, the birthplace of Boko Haram, and spearheaded the May 2014 assassination of the emir of Gwoza, a religious and traditional ruler who was targeted for speaking out against Boko Haram's extremism.

One arrested woman, Hafsat Bako, confessed to coordinating the payroll for operatives paid a minimum of 10,000 naira (about $50) a job, the defense ministry statement said.

Boko Haram was responsible for the April 2014 kidnapping of 273 girls from a boarding school in Chibok. Dozens escaped but 219 schoolgirls remain missing. The mass abduction sparked international outrage and demands for the girls' release under the Twitter hashtag #BringBackOurGirls.

The extremists last year took control of a large swath of northeastern Nigeria where they declared an Islamic caliphate. This year, they said they were the West African franchise of ISIS.

As their attacks spread across borders, a multinational army from Nigeria and neighboring countries mobilized and this year drove Boko Haram out of towns. Suicide bomb and attacks on villages continue.