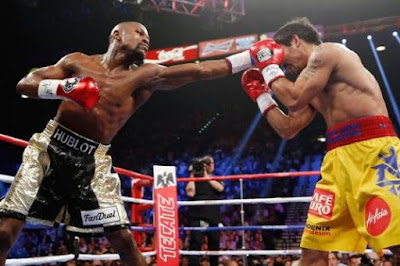 According to the Bleacher's Report, Floyd Mayweather may be getting stripped of his championship belt he won against Manny Pacquiao by the World Boxing Organization on the grounds of non-compliance.

Mayweather Jr. reportedly had until Friday, July 3, to decide if he would retain the 147-pound belt and allegedly declined the offer paying the $200,000 sanctioning fee that was required to do so.

In addition, Boxing News 24 is reporting that the undefeated boxer also decided against vacating the WBA and WBC junior middleweight titles.

The World Boxing Organization states that a boxer cannot hold world titles in multiple weight classes, and so may be stripping the boxer of his championship belt.