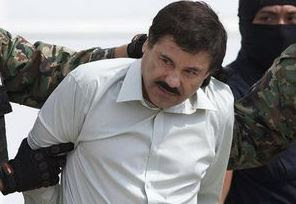 Top Mexican drug lord Joaquin "El Chapo" Guzman has escaped from a maximum security prison for the second time, security officials announced yesterday. Guzman, who headed the powerful Sinaloa Cartel, was last seen in the area of the showers in the Altiplano prison outside of Mexico City

The National Security Commission said in a statement that Guzman went to the showers shortly before 9 p.m. and wasn't seen for a while. Upon checking his cell, authorities found that it was empty.

A search operation began immediately in the surrounding area and highways. Flights have also been suspended at Toluca airport near the penitentiary.

Guzman was captured in February 2014 after more than a decade on the run. He faces multiple federal drug trafficking indictments in the U.S. and was on the DEA's most-wanted list.

Guzman had been caught previously in Guatemala in 1993, extradited and sentenced to 20 years in prison in Mexico for murder and drug trafficking. He escaped from another maximum security prison, Puente Grande in western Jalisco state, in 2001 with the help of prison guards.

The Sinaloa Cartel empire stretches throughout North America and reaches as far away as Europe and Australia. The cartel has been heavily involved in the bloody drug war that has torn through parts of Mexico for the last several years.

Sinaloa is believed now to control most of the major crossing points for drugs at the U.S. border with Mexico.