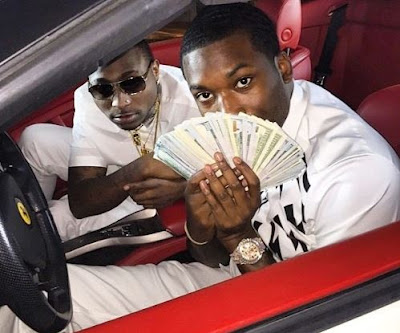 Looks like it. There have been rumours that the Nigerian Drug Law Enforcement Agency wants to question Davido over 'Fans Mi' video with US rapper Meek Mill which showed Davido handling substance suspected to be hard drugs. The rumours have been confirmed.

Speaking with Punch yesterday, the Director of Public Affairs of the NDLEA, Mitchell Ofoyeju, said that the anti-drug agency is conducting a full-scale investigation into the making of the video and an investigative panel might invite Davido for questioning if the need arose.

“I am aware that a panel is working on it (the video). The panel was set up soon after the video was released few weeks ago. When our attention was drawn to it, we viewed it and we discovered that it was improper. There is no moral lesson in it and he was just advertising drug trafficking.

"In the video, he exchanged a brief case supposedly containing narcotics for dollars. He was displaying affluence in the video. If it (the plot) had climaxed in an arrest and possible detention, we would have congratulated him for partnering with us. But the way he portrayed drug trafficking in the video was a means to an end, which the end is a life of affluence which we disagree with.” he said.

“We are looking at the issue holistically. We believe that there should be a body that was supposed to censor videos before they go out. Those are the things we want to investigate and verify. Was the video submitted for approval? If it was submitted, why was it approved, with such content?” he concluded