Nigerian man sentenced to life in prison for drug trafficking in Indonesia, prosecutors to push for death sentence 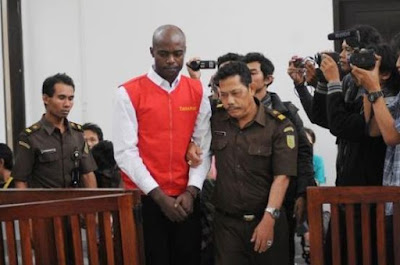 Uzoma was arrested at his apartment at the Margonda Residence tower in Depok in December 2014 during a raid by authorities from the immigration office. The banned substance was found in his home after a search was conducted. Uzoma was discovered to also be living in the country illegally.

"Uzoma Elele Alpha has been proven guilty for owning grade 1 narcotic drugs and is sentenced to life imprisonment,” Judge Hariyanto said in his ruling at the court on the southern outskirts of Jakarta.

Chief prosecutor Eddy Abdul Aziz said his team would consider mounting an appeal to obtain the death sentence. Indonesian has strong policies against drug trafficking in their country. 4 Nigerians were in April this year executed in Indonesia for drug trafficking.