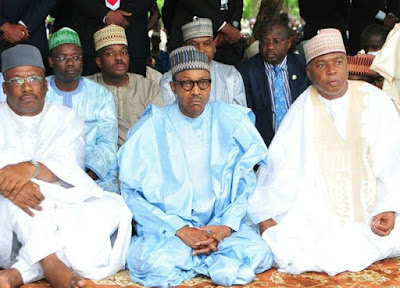 President Buhari has revealed only God can protect a leader against attack. Speaking to a delegation of FCT Muslim community at the presidential villa this morning,the president narrated how some youths who were excited to see him as he left the Sallah prayer ground,overwhelmed his security detail .. He said

"Today, during and immediately after the prayers, I think I was bombarded by the youths who almost overwhelmed the security, and I had to hold tight to my gown to get to my car. I was advised to enter the car from the ADC side and I refused.
I went across trying to wave my hand to the wild youths who wanted to see me. On an occasion like this, it shows that after what happened to President Ronald Reagan of the USA, it is only God Almighty that protects leaders because in a mob like this, anybody with a sharp knife can get access and do a lot of damage. So, all the policemen that were deployed and soldiers since six o’ clock in the morning, before I came out two hours later in the rains, cannot protect you, only God protects. I hope God will continue to protect us.