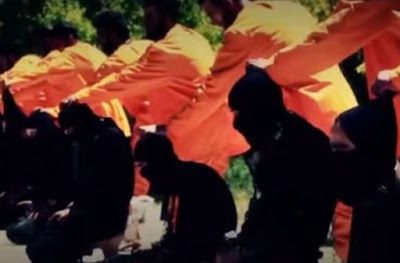 In a chilling case of an eye for an eye,a rebel group in Syria has responded to ISIS by beheading ISIS terrorists .. Hours after ISIS released a video where they beheaded 12 of their fighters, Jaysh al-Islam also released videos of their fighters capturing Islamic State fighters and slaughtering them.

In the video, the Jaysh Al-Islam soldiers,are dressed in the orange jump suits that are normally worn by prisoners of ISIS...The Islamic State's captured soldiers, dressed in black and given something to drink before each of their faces are shown in the video ..They are forced to kneel as a commander announces:

"Allah did not make a disease without appointing a remedy to it.""The most serious calamity for our jihad today is a group of people who grow at a time of division among Muslims.

This group claimed to be the mother state and made Takfir [accused of apostasy] on other Muslims, shed their blood and looted their properties and dignities.They worsened... the ordeal of Muslims by corrupting their religion and livelihood and killing the jihadi leaders who did their best to help our stricken nation.

They wreaked havoc on our people in liberated areas and cut the supply route of jihadis.

They left... Tehran intact and instead they attacked our mosques.This is the penalty for what they have committed.We also call on their fellows to repent."