SEE how this Man Organised Kidnappings in River State from London 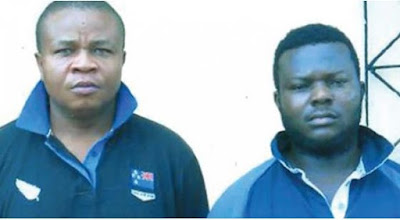 A 45-year-old man, Chukwudi Ubani has told the police how he ran a kidnap syndicate from his base in London. He was said to have been responsible for several kidnap cases in Rivers State and its environs for several years.

He was recently lured back to Nigeria and nabbed by the Rivers Police detectives at his house on Elioparanwo road, Port Harcourt. Also arrested was Chuwudi Ben Ononenyi, 29, who prepares the ground for every attack before Ubani returns from London for execution.

George road, Dunhill, Port Harcourt from proceeds of his esca­pades. Most of the houses were used to de­tain victims till their families were able to pay ransom money.

On their arrest, the state Commissioner of Police, Chris Ezike said that the com­mand had been embarrassed severally by the exploits of Ubani and his gang. On his endless list was the kidnap of a 33-year-old woman, Joy Ifeoma Izuorah who was picked up in her house at plot 132, Chibak Avenue, off Elioparanwo Woji, Port Har­court.

“She was picked up in her house on January 20, 2015 while the kidnappers demanded N100 million ransom. After 22 days, she was released to her family after they had collected N20million.

After a successful outing, Ubani bought a Lexus jeep for his second wife who is based in Port Harcourt. He quickly travelled back to London to avoid arrest. I instructed the operatives of Anti-Kidnap­ping Squad led by Supol Edward Shedrack to keep a tab on him. Luckily, we suc­ceeded in luring him back to Nigeria for another attack and was apprehended. Re­covered from him were English made gun, phones and N7million from his First Bank account,” Ezike stated.

At the police station, Ubani, an indi­gene of Nnewi in Anambra State, admitted to have led the gang behind several kidnap cases in the state, including that of Mrs. Joy Ifeoma.

“I am based in London and am married to two wives. Life has not been easy for me, and to meet up with expectation, I had to make quick money. Luckily for me at the end of each assignment, I will return to London because I know that the police will be tracking my phones to arrest me. I have been able to build several houses and hotels within and outside the state”, he confessed.

On his last exploit, Ubani said that he spotted Mrs. Ifeoma shortly after he dropped off his son in school. “I noticed that she was driving one of the latest cars in the country. I knew that her husband must be very rich. I followed her down to her shop where she parked her car. I alerted my boys to stay within the environment and monitor her movement.
They were able to trace her house and alerted me. On January 20, 2015, I moved in with my men and picked her up in the presence of her husband and kids.

“We kept her in one of my houses till the family was able to raise N20million. I gave my boys their share and joined the next available flight to London. I knew they were searching for me, that was why I ran out of the country,” he added.

The second suspect, Ononenyi said that he was shocked when he learnt that Ubani had been arrested. “I never knew they could arrest him. I was the one who told him that the police had stopped investi­gating that matter. If my master had con­fessed, then everything he said is the truth. He is our boss and it is our duty to watch his back and inform him when there is a good victim to kidnap.”

Grateful to God for sparing her life, Mrs. Ifeoma recalled that she was kid­napped by three gunmen in her house. “They tied me in a room for 22 days and used my phone to contact my husband. To the glory of God, they were able to raise N20million for the gang before I was re­leased on February 10, 2015”, she added.