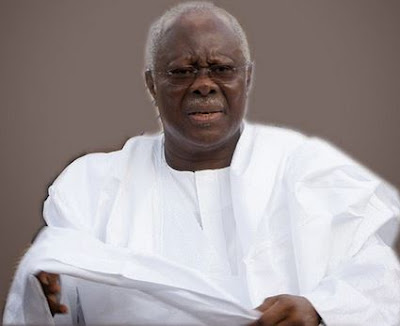 Buhari had since assuming office on May 29, appointed nine public officials, of which eight are from the North.

Also, Akande had alleged in an open letter that the National Assembly crisis was being sponsored by some northern elements, adding that there appeared to be a conspiracy by the North against the South-West.

Akande had said, “Most northern elite, the Nigerian oil subsidy barons and other business cartels, who never liked Buhari’s anti-corruption stance, are quickly backing the rebellion against the APC with strong support.

“While other position seekers are waiting in the wings until Buhari’s ministers are announced, a large section of the South-West sees the rebellion as a conspiracy of the North against the Yoruba.”

Reacting to the development, however, George predicted that the Yoruba would be grossly marginalised for the next four years because the Yoruba leaders within the APC did not plan properly before rushing into an alliance with the North.

He said Akande and Tinubu should have learnt from history and the politics of the late sage, Chief Obafemi Awolowo, who remained in the opposition all through his life because he put the Yoruba interest ahead of his personal ambition.

George, who spoke to our correspondent on the telephone, said the PDP was able to sustain democracy for 16 years because it understood Nigeria’s diversity and constantly zoned key positions among the six geopolitical zones.

He said the recent crisis in the APC started from Akande and Tinubu’s comment that the APC would not zone the positions of Senate President and Speaker of the House of Representatives.

George said the absence of zoning threw the contest for principal offices in the National Assembly wide open and led to crisis.

He said, “They (Tinubu and Akande) were not cautious when they were forming their alliance. They did not understand the dynamics of national politics. They were just driven by greed. I am not saying that they should not have formed an alliance with the North but it should have been on equal basis.

“They have now been given a political circumcision. Awolowo wanted Yoruba to be equal partners with the North and not a second force. I said it that we have returned to the 1960 political era and Tinubu and Akande have been slapped. I predicted all these.

“They were not thinking of the Yoruba but their selfish interests and I have no sympathy for them. Chief Akande said he did not believe in zoning and I knew that he did not know what he was talking about.

“Zoning gives everybody, including the minorities, a sense of belonging but Akande threw zoning of out the window and that move has backfired.”

“Go and read our constitution, there is no defined job for the vice-president. He only heads the Economic Council and is directed by the President. Let all Yoruba wake up now. You don’t enter into a coalition without deep thinking,” he said.