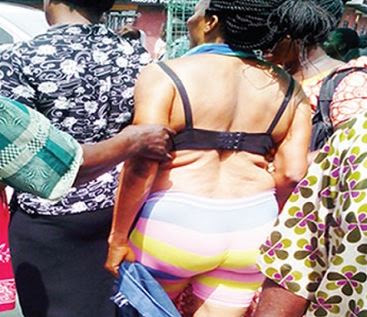 I wonder the kind of morals such a lecturer will inculcate into students if he can't control himself. How sad!

A lecturer with the University of Lagos, Mr Arthur Avwokeni Joseph, was detained at Alade Police Station in Somolu, Lagos State, after he allegedly fought a lady at petrol station and tore her clothes.

Mr. Joseph, 47, who works at the Business Administration Department of the university, went to a filling station along Fola Agoro Road, Somolu, to buy fuel when there was an altercation between him and 28-year-old Adeparusi Yetunde over who should buy the product first.

Mr. Joseph immediate alighted from his car and threatened Yetunde that if she were one of his students he would have dealt with her...

After the threat and further exchange of words between them, Joseph allegedly slapped Yetunde and she also grabbed him. In the ensuing scuffle her clothes were also torn by the man.

According to PM News, Mr. Joseph seized Yetunde’s cell phone while she also seized some of his books.

After the incident, Mr. Joseph went to Alade police station and reported the incident. When asked about the whereabouts of Yetunde, he said he did not know.

He was then asked to write a statement and while writing the statement, Yetunde’s phone that was with him rang and when the police picked the call and asked if she was the owner, she said yes and she was asked to come to Alade Police station where it was discovered that her clothes were torn.

The lecturer was detained along side Yetunde. Both were later granted bail. Two fighting!