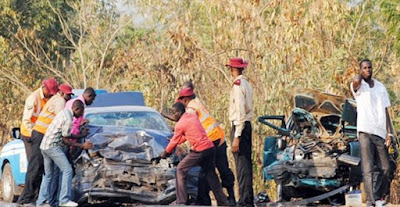 No fewer than 14 persons died yesterday in a road accident at Amasiri Secondary School junction of the Afikpo-Okigwe federal road in Afikpo South LGA of Ebonyi State.

The tragedy which occurred at midnight involved an articulated vehicle and a 14-seater bus conveying members of the Assemblies of God Church, Isu in Ohaoazara Local Government Area from a burial.

According to the SUN,Mr Roland Ogbuke, Afikpo Unit Commander of the Federal Road Safety Commission (FRSC), confirmed the accident to our reporter.
He said:

“We received a distress call early this morning of the accident. I mobilized my rescue officers immediately to the scene of the carnage.

“Sources informed us that the articulated vehicle-driver was trying to dodge a heap of sand on the road but hit the oncoming bus which was in a convoy of vehicles.

“The impact sent the bus crashing into a tree some metres away from the road. Bodies of passengers were mangled.

“We have to mobilise a nearby quarry company which used its heavy duty machine to cut the tree in order to evacuate the mangled bodies of the passengers,” he said.

Ogbuke noted that the crushed passengers were mostly women, as their relatives and church- members who were inside other vehicles, cooperated with his officers in the evacuation process.

“The police in particular, assisted the FRSC in evacuating the bodies to the Mater Misericordae Hospital, Afikpo because our vehicle developed a serious fault on the way.

“We are thereby urging citizens of the state whose relatives failed to return from a journey on Saturday, to visit the hospital to identify the corpses,” he said.“We urged the public to imbibe road safety practices by shunning night journeys, over- speeding among other practices that negate road safety regulations,” he said.