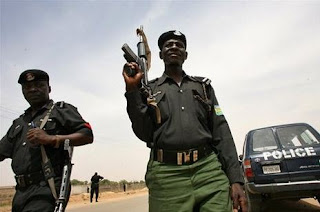 Punchng gathered that the hoodlums were moving in a convoy apparently in an attempt to carry out armed robbery attack on residents of Warri at different locations before nemesis caught up with them.

Graphic photo after the cut:

The State Police Public Relations Officer in the state, Mrs. Celestina Kalu, who confirmed the death of the suspects, disclosed that police detectives attached to the area commander’s office in Warri while on patrol sighted a black Toyota Land Cruiser, Toyota Avalon and others moving in convoy along Erejuwa road.

Kalu said the police suspected the movement of the hoodlums and chased them to Cemetery Road in Warri where the suspects engaged them in a gun battle.
.“Two of the suspected robbers were killed on the spot while two members of the gang were arrested. Others escaped with serious bullet wounds while the injured suspects are being treated in an undisclosed hospital to enable the police get more information and possible arrest other members of the gang,” she said.

The state PPRO said investigation was ongoing while the police were working towards arresting the fleeing suspects.

The President of the union, Mr. Clifford Anakpoha, had enjoined the people of the community to be watchful, saying protection of lives and property was imperative considering the spate of robbery in the community.

Investigation revealed that Ozoro community and its environs had been under siege of hoodlums, including suspected cultists. 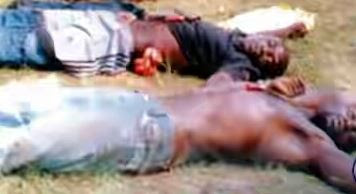