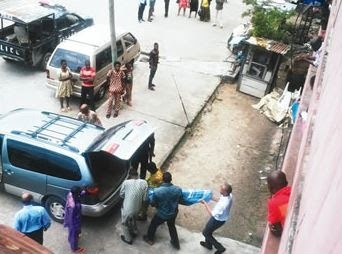 A 23-year-old, identified only as Ugochukwu, was found hanging in his apartment on 311 Road, FESTAC Town. He had sought admission into a university in Lagos State, and had written the 2015 Unified Tertiary Matriculation Examination.It was gathered that Ugochukwu, however, had yet to secure the admission.

According to Punch, on Sunday at about 12pm, Ugochukwu’s mother, identified only as Ngozi, and his two siblings came back from church to find him hanging in the sitting room.

The family reportedly stayed in a rented room and parlour in the area.

'AD'
The family members were said to have raised the alarm which brought neighbours to the scene, as everyone was taken aback at the sight of Ugochukwu’s dangling body.

The 23-year-old reportedly used a rope to hang himself from a ceiling fan. He was found dead.

A police source told our correspondent that Ugochukwu’s relations said the deceased did not give any clue as to why he committed suicide.

“Nobody can say why he committed suicide. But two Sundays ago, they caught him mixing cement to drink. The family members had actually gone to church, and he had stayed behind. It was a nieghbour who caught him and alerted the family members.

“But all efforts made to find out from him, what went wrong reportedly proved abortive, as he refused to tell anyone anything, including his mother.

Another resident in the area, who spoke on condition of anonymity, said the corpse had been taken to the mortuary by the police.

“Ugochukwu’s father’s whereabouts are unknown, but the boy has a younger brother and an elder sister.

“The corpse has been taken to the mortuary. Since he finished secondary school, he had not been able to secure admission. He took the UTME again this year.

“Everyone knows him as someone who did not talk too much. But no one knew exactly why he committed suicide. He was not working. He was usually at home. They were staying in a room and parlour. They are an average family.”

One of Ugochukwu’s neighbours, identified only as Oluja, said he returned from church to learn that the young man had committed suicide. He added that the last moment he had with the deceased showed that Ugochukwu was desperate about his university admission and financial problem.

“It was the policemen from FESTAC that took his body away. Everyone in the area is still in shock.

“I know that he had been worried about his admission to the university.

“He had tried several schools, but never made it. Also, he was having a financial problem. Maybe, it is the sum of these worries that made him commit suicide. He was a member of the Jehovah’s Witnesses.”