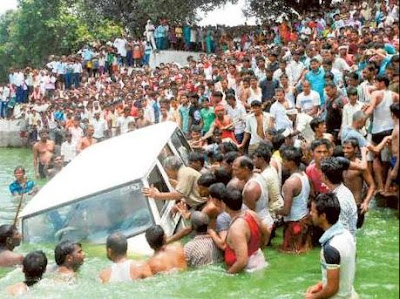 This is so sad...Five children drowned after an SUV they were traveling in plunged into a pond near a temple in Bihar, East India yesterday Monday August 3rd. Of the deceased, three are girls and two boys, aged between eight and twelve. The heart-breaking incident took place at Brahmpur village in western Bihar’s Buxur district.

According to the police, the victims’ family members had gone to a nearby temple to offer prayers to Hindu deity Shiva on the first Monday of the holy Hindu month of Shravan.

The SUV was parked near the pond and the children were told to wait inside but they unintentionally freed the handbrake and also removed the gear, bringing it into neutral. Instantly, the jeep began gliding towards the pond. The children began crying for help. They drowned in the pond which was full due to the continuous monsoon rain.

"The bodies of all the children have been taken out and sent for post mortem,” a local police official, R.K. Gupta, told the media today.