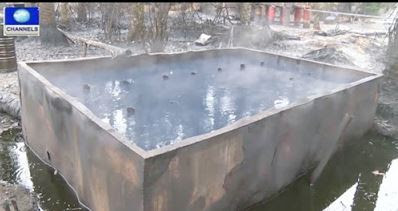 Naval officers sailed through the crude oil polluted water before arriving at the illegal refinery. The base operations leader, Innocent Ejiofor, took Channels Television round the site with locally designed refining tools before the naval officials set the place on fire.

Several shots were fired in the air, as the officers attempt to ward off any possible attack from militants in the area. Ejiofor explained the activities of the oil thieves in the region, stressing the Navy’s commitment to ending their activities.

“The base usually carries out this kind of operation regularly based on our naval intelligence report. The crude oil thieves use boats to carry the stolen products. Then discharge it into a tank for onward refining with the local refinery made of manually constructed tanks,” Ejiofor said.

About 78 illegal refineries and over 900,000 litres of stolen crude have been destroyed by the Navy in the last two months.

Chief of Naval Staff, Vice Admiral Ibok-ete Ibas, in company of senior naval officers addressed the officials. He said that the Navy was restrategising to make life unbearable for crude oil thieves in Nigeria. “We are redefining our patrol strategies to ensure that we create more choke points so that when you still what you want to steal, you cannot have access into the open sea,” he said.