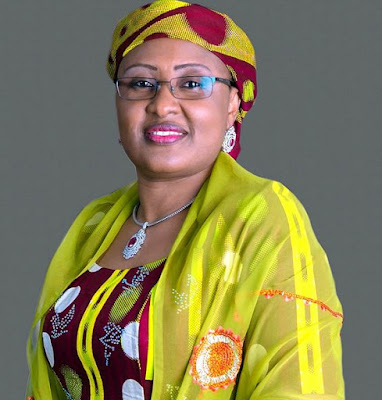 The Wife of the President, Mrs. Aisha Buhari, has been operating from the Office of the First Lady located inside the Presidential Villa, Abuja, SUNDAY PUNCH can report authoritatively.

Ahead of the March 28 presidential election, Buhari, who was the candidate of the All Progressives Congress, had promised that he would not have an office for the First Lady should he emerge victorious at the election.

“The Office of the First Lady is not in the constitution, so there’s no official role for them,” Buhari had said.

As the campaigns progressed however, Mrs. Buhari joined the APC team.That made observers doubt whether the President would be able to walk his talk.

'AD'
Since her husband’s assumption of office, Mrs. Buhari has dropped the title of “First Lady” used by her predecessors, including Mrs. Patience Jonathan.She adopted the title of “Wife of the President.”

Investigations by our correspondent have, however, showed that apart from the nomenclature, nothing significant has changed.

Mrs. Buhari and her handlers operate from the First Lady’s office used by her predecessors, it was learnt.The office is located beside the official residence of the President.

Her office, like it was under her predecessors, houses her staff members, including personal aides, security details and protocol officials, among others.

She has so far organised events similar to the ones that were not in short supply under her immediate predecessor, Mrs. Jonathan.

The first event organised by Mrs. Buhari was an elaborate “thank you dinner” she organised in honour of APC women and youths for supporting her husband’s election.

The President’s wife, during the recently concluded Ramadan, also broke her fast with some women leaders and the less privileged.

Recently, the Office of the Wife of the President, in conjunction with a United Kingdom-based private firm, organised a seminar on protocol, etiquette and security for wives of state governors.

At that event, the President’s wife charged the wives of the state governors to come up with laudable programmes to complement their husbands’ efforts.At the conclusion of Ramadan, Mrs. Buhari also hosted children to an elaborate Sallah party.

All these events were held inside the Banquet Hall of the Presidential Villa, Abuja, with glamour.

Apart from these, the President’s wife, represented by some individuals, had donated either cash or relief items to internally displaced persons and other groups in parts of the country.

Our correspondent also learnt that she is at the verge of initiating a pet project, a platform that will be used to meet specific needs.

That has also been the style of previous First Ladies.

The Director of Media in the Office of the Wife of the President, Zakari Yau Nadabo, confirmed to our correspondent on Thursday that arrangements were ongoing for a pet project for Mrs. Buhari.

Nadabo said the first step was to identify the area where the President’s wife is interested in making intervention.

He said, “It is not about initiating a pet project alone. The first step is to identify the area. The plan is already in the pipeline. Issues are just beginning to take shape.

“We do not want to rush. We want to take our time to do a careful analysis so that we can intervene in critical areas.”