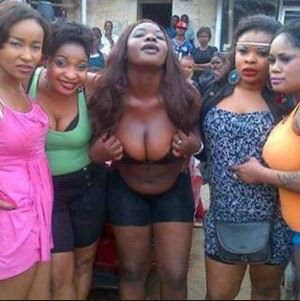 Over 2000 commercial sex workers in Anambra state were last weekend rendered homeless and flushed out of business by the Anambra State Urban Development Board (ASUDEB) at the cattle market, Amansea, in Awka North Local Government Area of Anambra State.

The State Urban Development Board rounded up the place at 3:12 pm with over 50 armed police personnel, saying that the brothels were being used by kidnappers.

The visibly angry prostitutes quickly mobilised and set the remaining structures in the cattle market ablaze shortly after the demolition, accusing the ASUDEP officials of ‘bias’.

One of the prostitutes, Rachael (not her real name) said the government officials were wicked and inhuman as they destroyed their brothel without notice, leaving behind some huts, kiosks and canteens that belong to the Hausa cattle traders.

Addressing newsmen, the General Manager, Anambra State Urban Development Board, Mr. Enemmuo Nathan Chinedu, who led the operation, said the exercise is part of Governor Willie Obiano’s resolve to rid the state all of crime and criminality, adding that the structures demolished were illegal buildings in Amansea Garriki where prostitutes, kidnappers and armed robbers reside.

He noted that similar demolitions will be extended to Nnewi, Onitsha, and other cities where brothels and illegal structures are situated until all prostitutes in the state relocate, even as he debunked the allegation of not giving them prior notice, saying that three weeks notice was given to them to vacate the vicinity before the operation.

According to Chinedu: “a lot of prostitutes live around Amansea cattle market, spoiling our children and constituting a nuisance in the area; and you know that anywhere there is brothel, criminals and kidnappers hover around there.

“In my capacity as the ASUDEB GM, I will ensure that this doesn’t exist anymore in the state; and our activities are in line with our amiable governor’s policy on zero-tolerance to criminals and kidnappers in the State,” he said.

On the allegation of bias in the demolition exercise, the Secretary of the cattle market, Alhaji Bello Maigari, stressed that all illegal structures in the market were earmarked by ASUDEB 21 days ago, saying that their wives’ canteen were not part of the ones marked for demolition.

“Ashawo (prostitution) is not part of our business here. Our main business is selling and buying of cows, and the idea of the demolition is to remove all illegal structures used for prostitution.

“The ones they did not demolish are the places where our cattle dealers that come from the North stay and canteens where our wives cook for our customers, but those ones have been razed by the inferno,” he regretted.

Men of the Anambra State Fire Service later came to the place around 5:11 pm to extinguish the fire, but by then most of the buildings had been razed.

The prostitutes were sighted boarding taxis to Ugwuoba in Oji River council area of Enugu State, where they reportedly operate in another brothel.

Guys, what are the most affordable brothels Sydney? Can you recommend some places for me? Thanks for your advice!