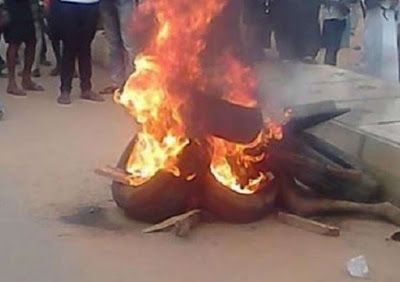 A mob on Sunday morning in Calabar, the Cross River State capital butchered and set ablaze a young man beside the fence of the Atu Secondary School along Goldie Street for allegedly robbing a woman of a pot of soup while two of his accomplices managed to escape.

The hoodlum in the company of two others are alleged to have attacked the woman in the wee hours of the Sunday at No 3, Mayne Avenue Extension in Calabar South. The robbers were attracted by the aroma of the soup the woman was warming in readiness to eat with her children before heading for the early morning mass at the nearby St. Bernard’s Catholic Church. They decided to cart the pot of soup away.
A young man who lives in the same premises with the lady said as the robbers were about to get out

of the compound with the pot of soup, the woman raised alarm prompting neighbours to go after them and caught up with the one carrying the pot of soup and dealt him several machete cut before setting him ablaze.

“It was almost dawn when the boys attacked the woman and carried her pot of soup and when they were about getting out of the compound, she raised alarm and people came out and pursued them and caught up with this one”. Vanguard's source who prefers anonymity said said the boy was not able to run as fast as his accomplices because he did not drop the pot of soup but was running with it which gave the mob the chance to catch up with him and butchered him.

“This is not the first time they have come to our compound to steal. Last week they removed the car battery of one of our neioghbours and once night falls, they waylay people, especially ladies around Goldie by Atu and snatch their handbags and phones”. He said.At the time of writing the report there was no sign of the presence of security agents there while the body was still lying by the Atu Secondary School fence.