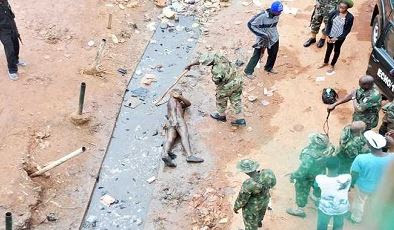 Authorities of the Nigerian Army on Wednesday, said it had identified the soldiers who violated the rights of a member of the public in Mararaba, Nasarawa state, on Aug. 8.

Brig.-Gen. Yusuf Shalangwa, Director, Legal Services, Nigerian Army, made this known in Abuja when the army appeared before the National Human Rights Commission (NHRC). The News Agency of Nigeria (NAN) recalls that on Aug. 8, a photograph of a man lying in the mud, with some soldiers standing over him was seen on the front page of a newspaper.
Consequently, NHRC carried out preliminary investigation and gave the army an ultimatum to

identify and produce the soldiers involved in the act.

“We have identified the soldiers involved in the violation of the rights of the man and we hope to take appropriate actions. The report of our investigations will be made available to the commission. We will give everyone a fair hearing,” Shalangwa said.

He assured that no one found culpable in the torture of the civilian would be spared after.

In his remarks, Executive Secretary of NHRC, Prof. Bem Angwe, emphasised the need for the commission and the military to chart a way in ensuring that rights of citizens were not violated by soldiers or other persons.

“We will have about 300 soldiers for training on human rights; we are sure that after the training the misconception on the issue of human rights violations will be brought to an end,’’ he said.

The executive secretary said the commission was informed that the victim had been attacked by angry youths in Mararaba before the soldiers intervened.