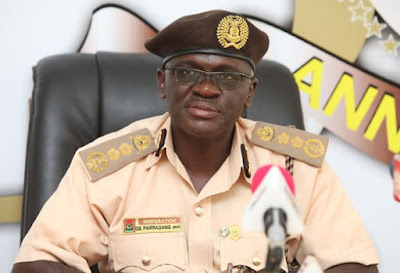 The Comptroller-General of Nigeria’s immigration service, Mr. David Parradang, has been suspended by president Buhari and many believe it's because of the controversy surrounding how wanted Lebanese terrorist and radical cleric, Sheikh Ahmed Al-Assir got a Nigerian visa even with a fake Palestinian passport. He was arrested at an airport in Beirut on Sunday Aug 15 on his way to Nigeria.

Parradang's suspension was announced this evening in a statement signed by the Director of Press, Federal Ministry of Interior, Mr. Yusuf Isiaka Alhaji, on behalf of the permanent secretary of the ministry. Deputy Comptroller-General of Immigration, Martin Kure Abeshi, will take over running the agency in the mean time.