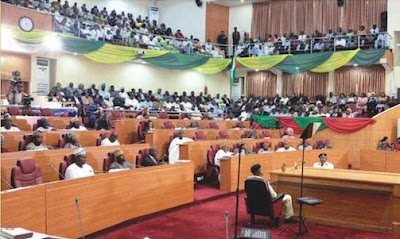 The Chief Matron of the Lagos State House of Assembly, Mrs. Caroline Oriola, was reportedly found dead in her office at the Assembly premises on Monday morning.

Oriola had gone to the office on Saturday but did not return home.

Her dead body was discovered on the Monday morning by a cleaner, who had gone to clean the clinic before the the resumption of work.

It was learnt from some staff that the Chief Matron had gone to her office on that Saturday to pick some drugs.
She allegedly drove her car to the Assembly complex, parked at the lawmakers’ car park, before proceeding to her office.

She was also said to have put on the air conditioner in her office and backed the door.

Security men on duty at the weekend were oblivious of the incident even though the woman signed in before she picked the keys to the clinic being a weekend.

Her colleagues and other staff of the Assembly have expressed shock at the incident with many describing her as a very good woman who never took the health of others lightly.

“It is indeed a sad news, nobody expected that she would die, when she did.

“We were told that she was in the clinic to pick some drugs only for her dead body to be found on the floor by a cleaner,” one of the staff who refused to mention his name, said.

It was learnt that Oriola’s husband, who had waited endlessly for her to return home, had gone to check for her at the Assembly.

However, her husband was said to have returned when she could not find her car at the general car park as she was supposed to have done.

The body of the deceased has been conveyed to the morgue using the Assembly ambulance.

It was accompanied by some staff of the House led by the Clerk of the House, Mr. Segun Abiru.