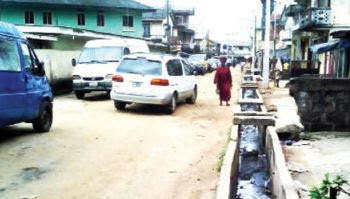 Some suspected cult members in the Mushin area of Lagos State have hacked a man identified as Tunde, aka Eleto, to death.

PUNCH Metro learnt that the victim was tricked from his house on Market Street, Oyingbo, to Kadiri Street, Mushin, where some suspected cult members dragged him to where he was killed.

He was said to have been shot dead and dismembered by his assailants on Tuesday.

Our correspondent gathered that Tunde’s corpse was dragged through the street to a canal around the railway line.
However, a resident, who claimed to have witnessed the killing, said Tunde was hacked to death around 10pm on the fateful day.

“The men were seven in number. They held him by the trousers and took him to the street as he begged them to spare him.They stabbed him in the face and chest, as his pleas fell on deaf ears.As they were about leaving, one of them said he was not sure the man was dead, so they went back and dismembered him. They also shot at him to be sure that he died.”

Another resident, who spoke on condition of anonymity, said he heard a gunshot in the night, and never knew what had happened until the following morning.

“I was indoors when I heard a gunshot that night. Nobody knew where it came from and what was happening. But by the following morning, we woke up to see the man’s body dismembered. We had to quickly alert the police,” he said.

PUNCH Metro was told that policemen from the Alakara Police Division deposited the corpse in a mortuary.

A source explained to our correspondent that Tunde was killed by his friends, who harboured animosity against him.

He said Tunde and the suspects once lived together on Market Street, before they (the suspects) were forced to relocate to Mushin.

“The feeling was that Tunde masterminded their ordeal. One of their leaders, Itakun, invited him for a meeting on that day and he foolishly went there, without knowing what he was up against.

“They used that opportunity to kill him.”