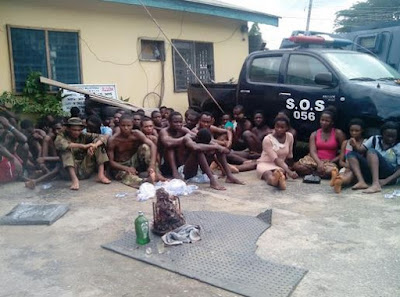 The Kwara State Command of the Nigeria Police, on Wednesday in Ilorin, the Kwara State capital, says it has uncovered a new strategy used by cultists and other hoodlums to poison their victims and dispossess them of their valuables.

The state Police Public Relations Officer, Mr. Ajayi Okesanmi, said the cultists and other evil minded people put tramadol inside a Lacasera drink or other soft drinks and make their victims to drink it thinking they were drinking safe soft drink.

Okesanmi explained that the victims, after drinking the poisoned drink, would fall asleep while the bandits would dispossess the victims of his or her valuables.

He warned the public to be cautious of such evil schemes and avoid taking gifts from unknown people, especially during traveling.

The PPRO spoke in Ilorin while parading three suspects for alleged involvement in the recent cult clashes in the state capital and for allegedly conspiring to poison a lady and dispose her of her money.

Okesanmi added that the police on Monday arrested two suspects, Adeniyi Sijibomi (18) and Tosin David for allegedly trying to poison a lady, Bidemi Adewole, of the Sapati Ile area of Ilorin.

According to him, the suspects, had poisoned a bottle of Lacasera drink with tramadol and attempted to force the victim to drink it, explaining that Adewole miraculously escaped.

The PPRO said Adewole later complained to the police that the suspects had allegedly conspired to kill her using a poison-laden Lacasera drink.

The police spokesman alleged that Sijibomi and John Onucho (25) were involved in the cult clashes in Ilorin in which two people were confirmed dead by the police.

He stated that the suspects were all members of Eiye confraternity, adding that two locally manufactured pistols, two live cartridges and one expended cartridge were recovered from the suspects.

But the suspects denied the police allegations against them..