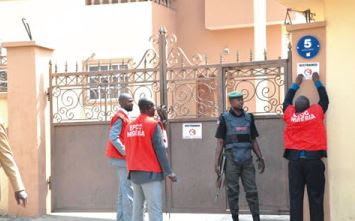 Two persons have made separate attempts to claim the $2.1m (about N418million) cash seized by the National Drug Law Enforcement Agency at the Murtala Muhammed International Airport from the custody of the Economic and Financial Crimes Commission.

The NDLEA had on July 3 intercepted the cash which was being conveyed by a bureau de change operator, Mr. Ibiteye John Bamidele.

Following his confession that he was on money laundering errand allegedly for a former Executive Secretary of the National Health Insurance Scheme, Dr. Olufemi Thomas, the NDLEA had on July 8 handed over the suspect and the cash to the EFCC.

'AD'
Investigations by SUNDAY PUNCH on Saturday reveal that two different persons have showed up at the Lagos office of the EFCC to claim the cash.Our correspondent learnt that one of the impostors, a man, who showed up to claim ownership of the money, later confessed to EFCC operatives that he was hired by some persons he didn’t name to retrieve the money from the commission.

His claim was said to have been punctured by the EFCC team and he was subsequently arrested.Similarly, a lady was also said to have appeared at the Lagos office of the EFCC, claiming that she was the one that gave Bamidele the money.

The lady was said to have made repeated calls to the supposed owner of the money who failed to fulfil his promise that he would meet her at the EFCC office.

When she realised that her partner had failed her with the refusal to appear at the commission. She was also said to have pleaded for mercy especially when the operatives confronted her with facts from Bamidele.

A top officer of the EFCC, who spoke on condition of anonymity toSUNDAY PUNCH, said,

“Another thing you must know about this drama is that the commission has foiled some attempts to retrieve the money.“From the time the case was handed over to the commission on July 8, 2015 to date, two people have come forward to claim the money.“A few days after the money was handed over to the EFCC, a man came to the office to claim the money but when he was grilled, he contradicted himself. In fact, he said he was hired by some persons to claim and retrieve the money from the commission.“Apart from the man, another woman showed up the following day to claim that she was the one who gave Bamidele the money.“According to her claim, the money was proceeds of an investment which was liquidated with a bank and was intended to be used to purchase a property for the construction of a cardiac centre.

“However, her claim fell through when operatives confronted her. The bureau de change operator who was caught with the money did not mention her name. Then she realised that she wasn’t going anywhere with her lies, she started pleading for mercy.”

Meanwhile, indications emerged on Saturday that Thomas had been granted administrative bail on Friday by the EFCC after undergoing interrogation in relation to the seized $2.1m.The EFCC had invited the former NHIS boss, the prime suspect, for interrogation on Friday and released him after hours of interrogation.
SUNDAY PUNCH gathered on Saturday that the EFCC operatives, who grilled the ex-NHIS boss in relation to the ownership of the controversial money, asked him to report to the Lagos office of the commission for further investigation whenever he is needed.

Another senior officer of the EFCC, who also spoke to our correspondent on condition of anonymity, said,
“The case involving the seized $2.1 million is still pending. The man was interrogated on Friday but released to go on what we call administrative bail.“Since the case is a Lagos case, he is expected to be reporting to the commission’s office in Lagos whenever he is needed.

Prior to Thomas’ interrogation, the EFCC had given the indication that it could declare him wanted after weeks of searching for him.