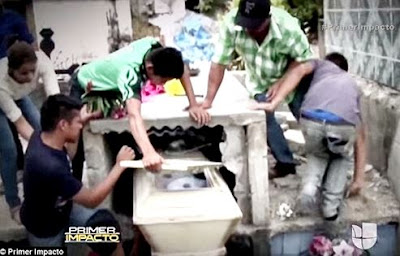 A video footage has emerged online and has already gone viral. It shows members of a grieving family breaking through the concrete grave from where 16-year old teenager, Neysi Perez, had been heard 'banging and screaming'.

Reports stated that the dead girl woke up in her coffin and screamed for help one day after she was buried, but unfortunately died again before desperate relatives could save her.

The deceased relatives who removed the girl's corpse, found that the glass viewing window on her coffin had been smashed and the tips of her fingers were bruised. But despite efforts to revive her, medics found no signs of life and she was later returned to the cemetery and reburied in the same mausoleum.

Ms Perez, who was 3 months pregnant, reportedly fell unconscious after waking up in the night to use the outside toilet at her home in La Entrada, western Honduras. It was believed she may have collapsed in an apparent panic attack after hearing a burst of gunfire.

She later became lifeless and was rushed to hospital, where three hours later doctors declared her dead. She was buried in the wedding dress she had recently used to get married.

A day after her funeral, her husband, Rudy Gonzales was visiting her grave at the La Entrada General Cemetery when he heard banging and muffled screams from inside the concrete tomb and raised the alarm.

The desperate family members broke through the concrete block tomb with a sledgehammer, before bringing out and opening up Ms Perez's coffin to try to revive her.