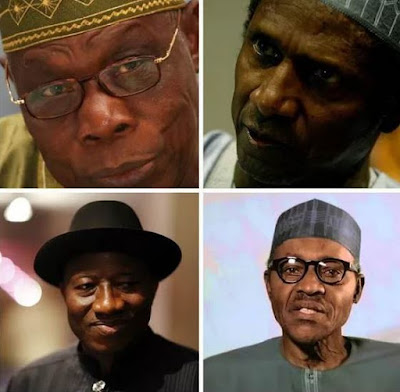 President Muhammadu Buhari, yesterday, set up a 13-member panel to probe two of his predecessors, late Umaru Musa Yar’Adua and Dr. Goodluck Jonathan, on procurement of arms and ammunition for the Armed Forces.

The investigative committee’s mandate is to identify irregularities and make recommendations for streamlining the procurement process in the Armed Forces.

“the establishment of the investigative committee is in keeping with President Buhari’s determination to stamp out corruption and irregularities in Nigeria’s public service.

“It comes against the background of the myriad of challenges that the Nigerian Armed Forces have faced in the course of ongoing counter-insurgency operations in the northeast, including the apparent deficit in military platforms with its attendant negative effects on troops’ morale.

“The committee will specifically investigate allegations of non-adherence to correct equipment procurement procedures and the exclusion of relevant logistics branches from arms procurement under past administrations, which, very often resulted in the acquisition of sub-standard and unserviceable equipment.”

Meanwhile, the Presidency has declared that Buhari’s administration is not a government of probes but of due process, law and order.

Senior Special Assistant to the President on Media and Publicity, Mallam Garba Shehu, who spoke with Vanguard, yesterday, also stated the administration of President Buhari will not shy away from probing the government of former President Jonathan in the face of alleged fraud and corruption.

He spoke following an accusation of selective probe against Buhari by a prominent northern leader, Tanko Yakassai.

The presidential aide said there are sensitive matters arising from briefings and official engagements, which the President cannot overlook and described as laughable the allegation that Buhari has excluded other former presidents like Chief Olusegun Obasanjo because he was close to them.

“Let me say that officially, nobody is under probe, even Dr. Jonathan. People should not make mistakes about the fact that what is going on are routine investigations. These are matters that the President has found on the table.

So, there is nothing like a probe. If Jonathan will be probed, you would have heard of, may be, an administrative panel of enquiry or judicial panel of enquiry. But it hasn’t come to that. These are matters of routine engagements of due process of law and order.

“President Buhari in his campaign said his government was not going to probe into the past. We are not probing but as a responsible government, you cannot bring to the table matters such as we are dealing with and then, the President will wave them off.

“The Office of the President may be powerful but it is controlled, regulated by due process and the constitution of the country. The President cannot wave away matters that are arising from either handing-over or the routine briefings.

How can anybody say he was part of the Obasanjo military regime and that’s why he’s not probing them?

Speaking further, the presidential spokesman queried why the allies of former President Jonathan would wait until now to champion the cause of probing past governments before Jonathan.

He stated that it was Jonathan’s responsibility to probe the governments of Obasanjo and Yar’Adua.

“Let me tell you, if Obasanjo and Yar’Adua and all of the past governments before Jonathan needed to have been probed, why did Jonathan shy away from his responsibility? Why didn’t he probe them while he was in office? Why didn’t Tanko Yakassai ask Jonathan to probe Yar’Adua, Babangida, Obasanjo? Why do they have to wait for Buhari to come and do what he should have done?

“It is common sense. So, if he didn’t probe them, why should his people ask some other person to probe them? If they felt it was desirable to probe the past administration, as a party, why didn’t they do it themselves? Why do they have to wait for President Buhari?

“This is not a government of probes. It is a government of due process and law and order. President Buhari is dealing with the matters he has found on the table and he has no power under the constitution to wave them. If somebody had stolen Nigeria’s one billion dollars of oil, President Buhari is not authorized to wave it off under the law. He should ask questions. There is no probe going on now. People who are creating the spectre of probes in the country just want to create unnecessary fear.”