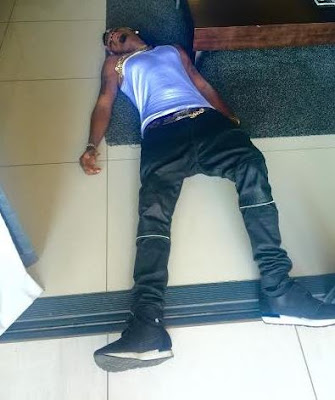 What won't these celebs do for fame and money? If someone can go extra mile to fake his own death for fame, that person can also kill himself for money.....SMH


This morning, I received a mail and a text message that Five Star Music artist Skiibii collapsed in his sitting room and died. And they sent me the photo above. The source said he'd dressed up and was going for his media rounds today when he suddenly fell and was unable to be revived. Because I know the guys at Five Star Music, I contacted them for confirmation. I actually called the music label's artist manager, Soso Soberekon, to confirm the news. Soso, who had already posted a candlelight image on his instagram page said he would call me back with confirmation, that they were just hearing about the incident, that he and Kcee were in Europe. He called me back at exactly 10.02am to confirm that Skiibii had passed on. So I carried the news.

But a few minutes ago (hours after I carried the news), Kcee called me to say Skiibii hadn't died. He said he received the news of his collapse this morning but said he wasn't sure what was going on because he was not in Nigeria. He said his brother told him Skiibii had been found with no pulse and wasn't breathing. They rushed him to the hospital and after hours there, he has been revived. Kcee told me he wanted me to be the first to announce he's back to life because I broke the news of his alleged death.

To be honest, I find this all very strange. Skiibii just released music and has been on the road for a week now promoting it. Someone said to me that all this could be a stunt...for him to trend (which he is - he's the number trending topic in Nigeria) and all media houses in Nigeria have carried his supposed demise. 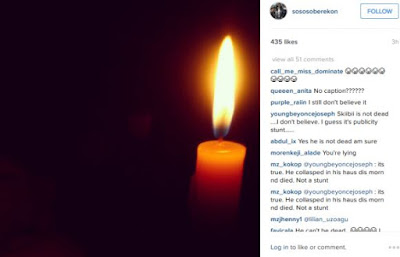 If this is a stunt (Skiibii dropped a video just yesterday), then it's quite sad that they would go to this extent to make him known to Nigerians. I know a lot of Nigerian artists put up stunts, but to play with your life is sick! Extremely sick to fake your own death for fame and attention! But if it's not a stunt and he indeed woke from the dead, then I'm very happy for him.