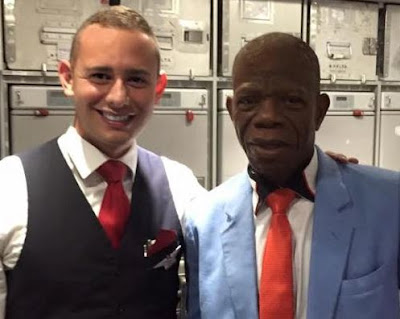 Micheal Ray Huerata, who is a flight attendant/air host, with one of the international airlines shared this warm story on his Facebook page of his encounter with an elderly Nigerian man pictured above with him who was traveling out of Nigeria for the first time. Read what he wrote below...

"I'd like to share with you the most meaningful experience I've had in my 2+ years of flying. While boarding our flight from Nigeria last night, the man you see in this picture was seated in an aisle seat. As I walked by him, he waived me down and after I approached, he said "I must go to the toilet to relieve myself." I said "Ok, sir, the toilet is right behind you," pointing towards the bathrooms near the back galley. He repeated his request, but this time he was motioning both hands towards his lap and politely said "but I need to go to the toilet, please."I assumed he was just reiterating his need to pee, so I again pointed towards the aft bathroom. He continued to motion towards his lap, but this time he grabbed his seat belt. It hit me; he had placed his seat belt on, but had no idea how to lift the buckle to release the belt! I apologized for not having understood, smiled, and showed him how to release his seatbelt. I shared this story with the crew shortly after and we were all humbled by the experience. But the story doesn't end here. Throughout the 12 hour flight, the man was as nice and generous as could be. He was smiling, enjoying the meals and entertainment, while always offering a genuine "thank you."

In the last hour of the flight, he came to the back galley and was just looking around in awe, fascinated by the plane. He and I began to talk... In his decades of living, today was this man's first time in an airplane, his first time seeing a seatbelt, and his first time leaving his small village. As a mathematics and geography teacher, he'd always dreamed of visiting the United States. So he saved money his entire life so that one day he could purchase a flight, a new suit, and a camera. Today was that day, and today I had the distinct honor of being able to serve him on the first leg of that journey. I'm moved to tears that I could be so lucky to meet this man. Of the thousands of passengers I've ever served, of the rich and famous, successful and powerful, frequent travelers and million milers, serving this one man - in coach - was the greatest honor I've had as a flight attendant.

Every man has a dream all u,ve got to do is chase it