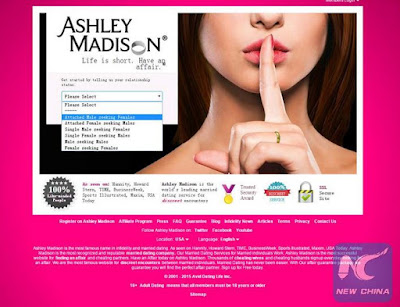 Today is indeed a bad day for millions of cheating spouses. 32 million of them, who are registered users to adultery website AshleyMadison.com, are currently looking for a good alibi after hackers released their names, email and street addresses, phone numbers and credit-card details on the dark Web.

The data dump comes one month after the website's parent company, Avid Life Media, confirmed a "criminal intrusion" into its system. The website connects people looking to have an extramarital affair.

Going by the name "The Impact Team," the hacker or hackers said the breach was spurred by a disagreement with Avid Life Media's business practices, specifically a "full delete" feature. For $19, the company allows repentant cheaters to scrub their information from the website.

"Users almost always pay with credit card; their purchase details are not removed as promised, and include real name and address, which is of course the most important information the users want removed."

Business practices aside, the hacker or hackers also had another message:

"Too bad for those men, they’re cheating dirtbags and deserve no such discretion...Too bad for ALM, you promised secrecy but didn't deliver."

So they gave an ultimatum to AshleyMadison's owners - take the website, and its sister site, Established Men, down or they'll blow everyone's cover.

The Ashley Madison site is still up and running.

A statement posted on Avid Life Media's website said "this event is not an act of hacktivism, it is an act of criminality."

"It is an illegal action against the individual members of AshleyMadison.com, as well as any freethinking people who choose to engage in fully lawful online activities. The criminal, or criminals, involved in this act have appointed themselves as the moral judge, juror, and executioner, seeing fit to impose a personal notion of virtue on all of society.

“We will not sit idly by and allow these thieves to force their personal ideology on citizens around the world. We are continuing to fully cooperate with law enforcement to seek to hold the guilty parties accountable to the strictest measures of the law," the statement said.

Established in 2012, AshleyMadison.com says on its homepage that it is "the most famous name in infidelity and married dating." Currently, the site claims nearly 40 million users.