I prefer to live in prison-Serial killer pleads [PHOTO] 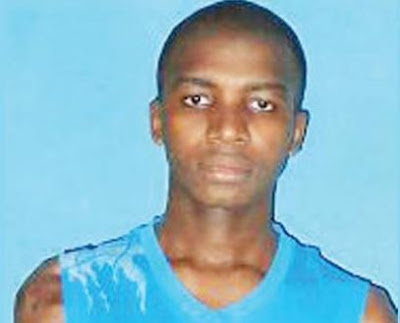 Cross Rivers State Police command has arrested a suspected serial killer, Cyril Ojang Etim, 25, who had been wanted by the police over series of unexplained deaths in the state.

He was picked by detectives attached to the state Criminal Investigation Department days after he alleg­edly beheaded one Ubong Asuquo who caught him steal­ing N4000 from his house at old Netim, Akamkpa Local Government Area of Cross River State.

In the course of investigation, it was discovered that he was also responsible for the death of his ex-lover, Esther. He admitted to have killed her when he discovered that Esther, who was two months pregnant, had an abortion.
On his arrest, the state Commissioner of Police, Mr. Henry Fadairo told Saturday Sun that he had received sev­eral reports of the activities of Etim especially from rela­tives of victims that were either raped or murdered.

He explained that the manhunt was intensified when it was confirmed that the suspect beheaded his colleague, one Ubong Asuquo.

“When the news of his arrest broke, several persons came forward alleging that he either raped or stole from them.”

Investigation also revealed that sometime in 2012, the suspect was caught trying to strangulate one of his vic­tims. Not aware that he had become a serial rapist and a killer, the community flogged and asked him to go home and sin no more.

“Also in 2013, he confessed to have killed his lover because she had an abortion. He was arrested then and charged to court. He was later released by a chief judge in 2014, when his name was submitted as those who ap­peared to have repented,” CP Fadairo said.

The police boss further said that unrepentant Etim con­tinued in his former trade of robbery.

“On February 27, 2015, he visited the house of the late Asuquo and stole his N4000. Unfortunately for him, Asuquo caught him red handed and chased him with a cutlass. Both ended up in the bush and Etim over powered him, picked up the cut­lass and beheaded Asuquo. A passerby who witnessed the incident rushed to the nearest police station and reported the matter,” Fadairo added.

At the police station, Etim told Saturday Sun that he believes that he was under a spell.

“I do not know what could be wrong with me. I normally recover my senses as soon as I have committed a crime. It all started in 2010 af­ter my 20th birthday. I discovered that my love for women increased. I do not have money but I wanted to have sex. If any woman tries to resist me, I will force her to have sex with me.

“I have been caught severally but because I have an innocent face, people will blame the women for seduc­ing me. Unfortunately, in 2013, my lover Esther told me that she was pregnant. I was already dreaming that I will become a father at a young age when she came back a week later and told me that she had an abortion. I was devastated and out of anger, beat her to death,” he said.

On realising his mistake, Etim handed himself over to the police.

“I was arrested and charged to court. Honestly, I had repented from my sins and gave my life to Christ. I was well behaved, that is why the prison authority sub­mitted my name to the Chief Judge. She was the one who approved my release.

“When I was finally released in 2014, the devil took over my life again. I went back to the same crime. I was very broke and since I knew the late Asuquo, I decided to sneak into his house and get some money. The first time I stole N3000 and was not caught. I went back three days later and was about to collect the N4000 that I saw in one of his drawers when he saw me. He shouted and picked his cutlass. I ran as fast as I could but he came after me. I knew that he would kill me, that was why I fought back. I had no choice but to kill him. I never knew that someone saw us.

“I am willing to go to prison because it appears that I am stable inside there. I know that I have committed a lot of atrocities but I am begging the families of my vic­tims to forgive me because I want to make heaven”, Etim pleaded.