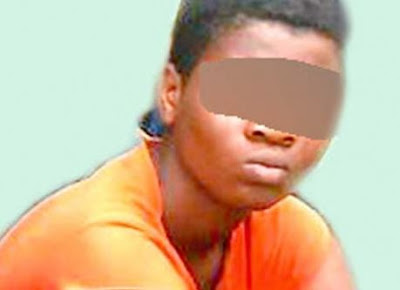 A 16-year-old girl, Ifechukwu Atunanya, claimed that she was forced to sleep with every male member of the cult during her initiation.

Ifechukwu was among 75 suspected cult members who were rounded up by Anambra State Police command on July 3, 2015. All the suspects were alleged to be members of the Supreme Vikings Confraternity and were all arrested in a bush in Awka during the initiation of new members.

It was during the raid that 16-year-old Ifechukwu was arrested.

At the police station, Ifechukwu, a second­ary school dropout and member, claimed that she had to travel to Anambra from Abuja just to witness the initiation of new members.

'AD'
“I joined them three months ago and during my initiation, I was forced to have sex with every registered member of the cult present that night. I was given a sedative so as not to feel what they were doing. It was not easy, but I bore the pain,” she said.

Her parents, who are from Anambra State, are still alive. However, Ifechukwu said that they were not aware of her secret cult ac­tivities.

“I got to know about the cult activity through a friend. She assured me that all the connection that I needed in this life will be made if I joined the group. I am from a poor family and I wanted to be the light that will change the situation in my family.

“She never told me that I will be raped till the day of initiation. The day we were initiated, I was the only girl in their midst. Al­though, I have not started reaping the gains, I was determined to be a successful member. I was further convinced to stay because I dis­covered that they are more honourable than the others. I am sorry and would love to be given the opportunity to go back to school. I never knew that it is crime to be a member. I am sorry,” Ifechukwu pleaded.

Another member, Ugochukwu Agbazuo, who also spoke with Saturday Sun, said that they are all undergraduates of various institu­tions in Anambra.

“Apart from some of our national leaders, we are all students. I was ini­tiated into the cult while I was still in my first year. I had no choice but to join them because of the harassment in school. I discovered that most of the Engineering students in my school were members of different cult groups.

“Again, if you identify with a known cult in school, the lecturers will respect you. You don’t have to buy handouts or offer bribe to get credit in a course. This was why I joined them,” he said.

Ugochukwu insisted that they did not steal or harass innocent people.

“The guns that were found with us were bought in case there was a clash in school. It is our leaders who are all graduates and working across the country that normally assist us to secure the arms. It is strictly for defence and one of the rules of our group is that you must read and pass your exams on merit.”

On the issue of rape, Ugochukwu said it only happened with female members. A fe­male intending member cannot undergo the rigorous process during the initiation. So, our leaders suggested that the best way to get them under oath is for every registered mem­ber to have sex with her during initiation. She would be semi-conscious during the process so that she will not physically feel the pain. Ifechukwu’s case was better because we were only 20 registered men present on her day of initiation. All of our female members were raped,” he further said.