If Igbos are butchered again, Nigeria will break; Fani- Kayode 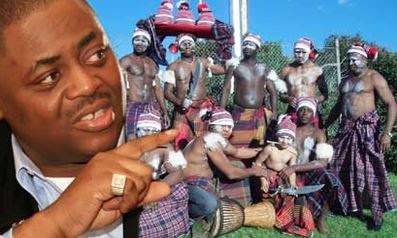 Responding to comments credited to Junaid, Fani- Kayode in a message to Vanguard noted that his statements that If the igbo feel marginalised they should attempt to break away again, was most uncharitable and careless, warning that if there was any attempt to butcher the Ibos or a repeat of what happened in 1966, it would be resisted by not only the Ibos, but by all Nigerians, with attempt to secede, which according to him, would be successful.


According to him, the like of Junaid must learn from history, our mistakes, preach peace and peaceful coexistence, rather that boast and beat our chests for yet another round of war.

Fani- Kayode reacting to a statement titled, ” If the igbo feel marginalised they should attempt to break away again”- Dr. Junaid Mohammed, The Punch Newspaper, 17th August 2015, said, “Given the immense suffering that the igbo were subjected to both before, during and after the civil war this is one of most insensitive, cruel and puerile comments that I have heard in recent times.

“I daresay that if Junaid Mohammed’s Nigeria ever butchers over 100,000 innocent igbo civilians again, as they did in the north in 1966 just before the civil war, there will indeed be another attempt to secede, but this time it will not only be successful, but they will also take many others with them.

“Rather than boast and beat our chests, we must learn from our history and we must never repeat its mistakes.”

Dr. Junaid Mohammed, had in an interview in one of the national dailies, dismissed the sentiments shared by a former Governor of Anambra State that the Igbo have not been treated fairly in the governance of Nigeria.

Junaid who noted that people of the Igbo nation have enjoyed favourable treatment, said it was wrong to reward the Igbo simply on the basis of the Nigerian Civil War, which lasted between 1967 and 1970.

Mohammed had said, “If it is about Buhari making the appointments based on merit, I have no problems with it. I don’t believe Buhari or Nigeria owes any Igbo anything. I don’t care what Ezeife says; if they had seceded, there would have been no Nigeria today. As people who acted outside the interest of Nigeria as a country, to expect compensation is a very odd logic.

“If the Igbo don’t like it, they can attempt secession again. If they do, they must be prepared to live with the consequences. Nobody owes them anything and nobody is out to compensate them for anything.”