Inspector shoots self dead in Lagos 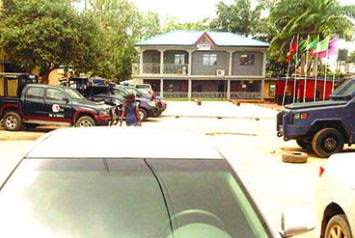 The atmosphere at the Mobile Police Force 20, in the Ikeja area of Lagos, had been tense since Tuesday after a police inspector, identified simply as Medugwu, mistakenly shot himself dead, while adjusting a faulty rifle.

According to Punch Metro ,the inspector, who was attached to MOPOL 20, was the second-in-command to the armourer. He was said to have accidentally pulled the trigger of the rifle, which sent a bullet to his jaw.
Our correspondent gathered that on Tuesday, at about 10am, a policeman had brought the faulty rifle to Medugwu to examine and readjust for him.

It was learnt that the second-in-command to the armourer collected the rifle, and tried to find out where the fault was. The rifle was said to have been fired in the process.

Other policemen in the area were said to have rushed to the scene and taken Medugwu to the Lagos State University Teaching Hospital, Ikeja.The inspector, however, died at about 1pm in the hospital.

Speaking with PUNCH Metro, a policeman, who claimed to be an eyewitness, said Medugwu accidentally turned the barrel of the rifle on himself during the check, before his finger touched the trigger.

He added that the inspector died as a result of severe injuries sustained from the gunshot.He said,

“He was the second-in-command at the armoury in the MOPOL 20. A policeman brought a faulty rifle to his office to examine. While he was doing that, he mistakenly turned the barrel of the gun on himself, and he mistakenly pulled the trigger.

“We rushed him to LASUTH, where the medical personnel battled to save his life. But, he died at about 1pm. His head was badly injured. Medugwu’s death shook all of us.”