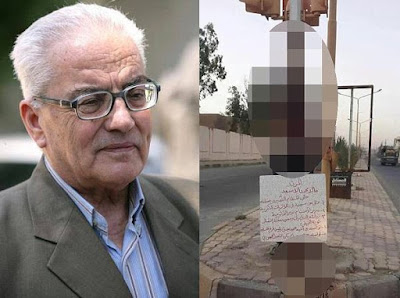 ISIS have brutally murdered an 82-year-old retired archaeologist because he refused to tell them where gold and ancient statues were hidden.

The family of Khaled Asaad are said to have been told that the retired scholar, who worked for more than 50 years as head of antiquities in Palmyra, was beheaded by ISIS yesterday.

Mr Asaad had been detained and interrogated for over a month by the militants, who demanded to know where many of the ancient city's priceless artifacts had been taken in the days before and after ISIS took control of the city.

Sickening images proudly shared on social media by supporters of the terror group showed the mutilated remains of Mr Asaad chained to a railing, with his severed head - still wearing glasses - placed on the floor between his feet.

Mr Asaad is understood to have refused to leave the ancient city of Palmyra when the jihadis captured it, Syria's current antiquities chief Maamoun Abdulkarim said.

A UNESCO World Heritage site famed for well-preserved Greco-Roman ruins, Palmyra was seized from government forces in May.

Mr Abdulkarim said that he had urged Mr Asaad to leave Palmyra along with the artifacts, but he had refused.

'He told us 'I am from Palmyra and I will stay here even if they kill me.''

Mr Asaad was executed in the centre of the ancient city yesterday afternoon, with sickening images of his mutilated corpse widely shared by ISIS supporters on social media.