Its Over! Nicki Minaj Officially Breaks Up With Meek Mill 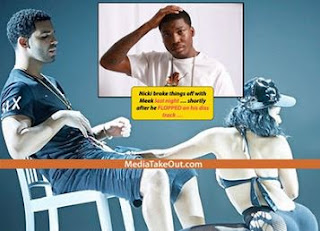 Just when you thought that Meek Mill's week couldn't get any worse, his girlfriend, Nicki Minaj, has reportedly broken up with him.

Rick Ross's Maybach Music rapper, Meek Mill, has been trending worldwide for two days now over the beef he's having with Drake who is on the same Record label with his girlfriend, Nicki Minaj.

According to an exclusive report with popular U.S gossip website, MediaTakeOut, it seem the hot romance between Meek Mill and Nicki Minaj is over! Below is how the site reported the story;

"Just when you thought that Meek Mill's week couldn't get ANY WORSE . . . MediaTakeOut.com learned that Nicki Minaj and Meek have officially decided to call it QUITS. Nicki reportedly broke it off with Meek LAST NIGHT. Don't worry concertgoers . . . they are still of GOOD TERMS - at least NICKI IS with Meek. The two plan on FULFILLING the rest of the tour obligations together.

What caused the BREAKUP . . . and why did it happen LAST NIGHT . . . shortly after Meek Mill's new diss track FLOPPED?? According to one of Nicki's BEST FRIENDS, "It's complicated. I think they took their relationship too far, too fast." Nicki's homie REFUSED to say whether the Drake WAR had anything to do with it.

But we suspect that IT DID. You'll recall that MediaTakeOut.com BROKE THE NEWS that Meek STARTED THE WAR when he learned that Drake and Nicki had a 'DATING' RELATIONSHIP in the past. And it has to be MORE THAN COINCIDENCE that Nicki DUMPED DUDE . . . just when he's become a LAUGHING STOCK on social media."