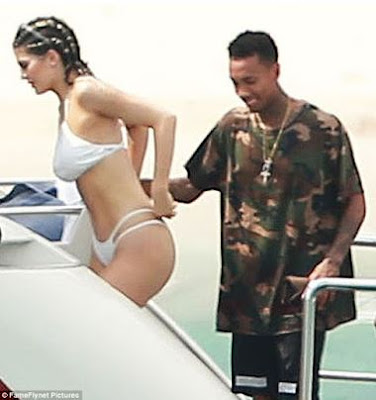 If she actually accepted the offer, it would see her almost following in half-sister Kim Kardashian's footsteps after she made headlines in 2007 when her infamous video with former boyfriend Ray J was leaked online.

According to TMZ, Vivid Entertainment have made an incredible $10MILLION offer for her and Tyga to get intimate in front of a camera.

Vivid Entertainment has already fired off a letter to the freshly-minted adult, offering her a $10 million deal for a video featuring her and Tyga. Vivid honcho Steve Hirsch writes, "Kim's sex tape helped launch her career and would be nothing but positive for you."

Vivid has some stiff competition. BangYouLater sent its own written overture, offering $1.8 million up front, saying, "This event will make you even more famous than either Kim K or Paris Hilton."

BangYouLater is banking on a good performance by Tyga, writing, "Your scene must be at least 22 minutes in length."