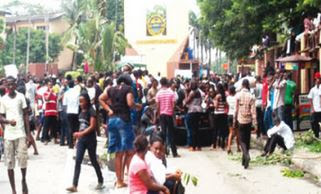 The police in Lagos State have arrested a part-time lecturer, Afeez Baruwa, for allegedly raping an 18-year-old girl, identified as Caroline (pseudonym) in the Yaba area.

PUNCH Metro learnt that the victim, who was reportedly raped inside a study room, was seeking admission into the University of Lagos, Akoka.

It was gathered that Baruwa was arrested by the Surulere Police Division on Monday, August 3.

Our correspondent gathered that the lecturer, however, told the police in his statement that the sexual intercourse was by mutual consent, insisting that he did not rape the victim.


PUNCH Metro learnt that the lecturer and Caroline’s father belonged to the same landlords’ association in the Abesan, Ipaja area.

It was gathered that the victim’s father had allowed her daughter to follow the lecturer on July 23, to UNILAG for an admission process.

It was learnt that Baruwa allegedly took the girl inside one of the study halls, bolted the door, and raped her.

It was learnt that after the incident, Caroline, who told her parents about the rape, was taken to a non-governmental organisation, Mirabel Centre, where she was tested.

The medical result reportedly confirmed that the teenager was violated.

Our correspondent gathered that Caroline was thereafter taken to the Lagos State Office of the Public Defender, and the matter was also reported at the police station. Baruwa was subsequently arrested.

A police source in Surulere said, “The suspect is actually a friend of the father of the girl. The girl had written the Unified Tertiary Matriculation Examination, and she needed assistance with the post-UTME.

“So, the father sent her to meet and discuss with the lecturer.

“But, it turned out that on July 23 when the girl visited the suspect, he raped the girl in the study room.

“The suspect confessed to the act, but his claim is that the sex was by mutual consent.”

The Director of the Office of the Public Defender, Mrs. Omotola Rotimi, said the OPD would write a letter to the UNILAG Vice-Chancellor on the incident, so as to ensure that such did not reoccur.

She said, “The victim’s father wanted the lecturer to assist with his daughter’s admission. On the fateful day, the girl left with the lecturer as early as 5.30am, and they got to the school at about 7am.

“No one had arrived at the hall except a woman. While the exams had yet to start, he raped her. She went home, and the father found out that her daughter had been raped. He took her to the Mirabel Centre, which then informed the OPD.

“The centre also contacted the police at the Surulere and Isokoko divisions, and the suspect was arrested.

“We are going to defend the girl, and we are writing the VC. The suspect is said to be in the Department of Accounting. He claimed the sex was consensual, but that is not a defence.”

Our correspondent gathered that Baruwa, who was in custody, would be charged to court on Thursday (today).

She said, “The suspect claims to be a part-time lecturer, but not an employee of the University of Lagos.

“He has confessed to the crime and the medical result proved same.”