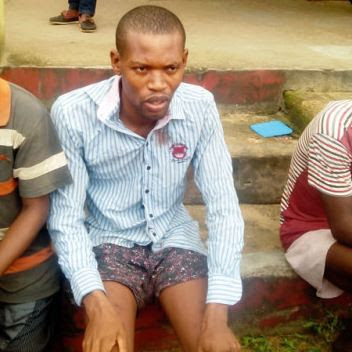 A 30-year-old man, Richard Effiok, on Monday confessed to stabbing his girlfriend after three rounds of sex.

Effiok, who identified his deceased girlfriend as Bassey Udoh (23), said the incident happened on May 22, 2015, at Nelson Mandela Street in Calabar, Cross River State.

According to Punch, the suspect made the confessional statement at the headquarters of the state police command on Diamond Hill Road, when he was paraded along with other suspected criminals by the Commissioner of Police, Mr. Henry Fadairo.

'AD'
Effiok, who hails from the Akpabuyo Local Government Area of the state, said,

“The problem started when I had three rounds of sex with the lady and gave her N1,000 as transport fare back home, but she demanded N5,000.Bassey is my lover.

We have been dating for two years. On the day of her death, we had three rounds of sex. I can’t really say if I was tempted by the devil to kill her.When she refused to collect the N1,000 that I gave her, we started quarrelling and it led to a fight. I brought out a sharp kitchen knife and stabbed her.After stabbing her, she screamed and neighbours broke into my room. They saw her on the ground in a pool of blood. She later died,” he said.

According to him, it was his neighbours that called the policemen that arrested him.

“I regret my actions, I wish I did not kill her,” he said.