Moroccan Man Dies while being Smuggled to Spain in a Suitcase 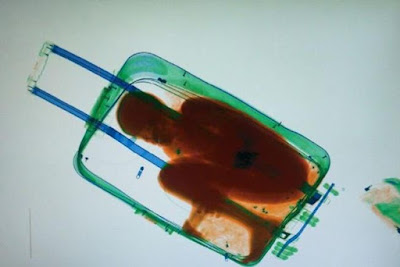 I guess he was thinking what worked for the eight-year-old boy from the Ivory Coast will work for him. Sad.

A 27-year-old Moroccan man died from suffocation while trying to illegally enter Spain hidden inside a suitcase that was in the trunk of a car on a ferry crossing.

The man's older brother, aged 34 who appears to have tried to help smuggle him in, boarded the ferry

linking Melilla, a Spanish territory in North Africa, and Almeria with a car on Sunday. However, during the crossing he noticed that his brother was not breathing and alerted the ferry's staff. Crew members as well as emergency services workers in the port of Almeria tried in vain to resuscitate the man.
sponsored post

The older man, a Moroccan with a French passport, has been arrested and charged with involuntary manslaughter.

Thousands of migrants from Morocco try to enter the European Union illegally via Spain each year.
On Sunday, Morocco’s interior ministry said four migrants from sub-Saharan Africa drowned while trying to swim around a fence from the mainland to the second enclave, Ceuta. Three others were rescued by the Moroccan navy.

A security scanner picture of the 8 year old boy curled up in the suitcase above serves as a shocking reminder of the lengths migrants take to try to seek a better life in Europe.