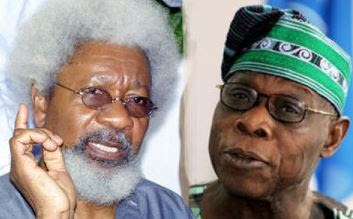 Professor Wole Soyinka has taken another swipe at former president Olusegun Obasanjo, referring to him as a lair and economic illiterate.

He said this while responding to questions during a programme tagged: ‘An evening with Wole Soyinka’,.

Obasanjo is entitled to his opinion. But the question is: ‘Who respects the opinion of a liar?’I can spend the whole night proving that he is a liar. Obasanjo was once described by an economist, the late Prof Ojetunji Aboyade, as an economic illiterate. They nearly ‘went into blow’ that night. It was Prof. Mabogunje who separated them.
“So, if an economic illiterate calls somebody a political illiterate, no problem at all.

“In ‘ My Watch’, Obasanjo told the first lie when he said he deplored lies. Anybody who said he never plotted to have an unconstitutional third term in office, even as a writer, I need a word to describe him.”